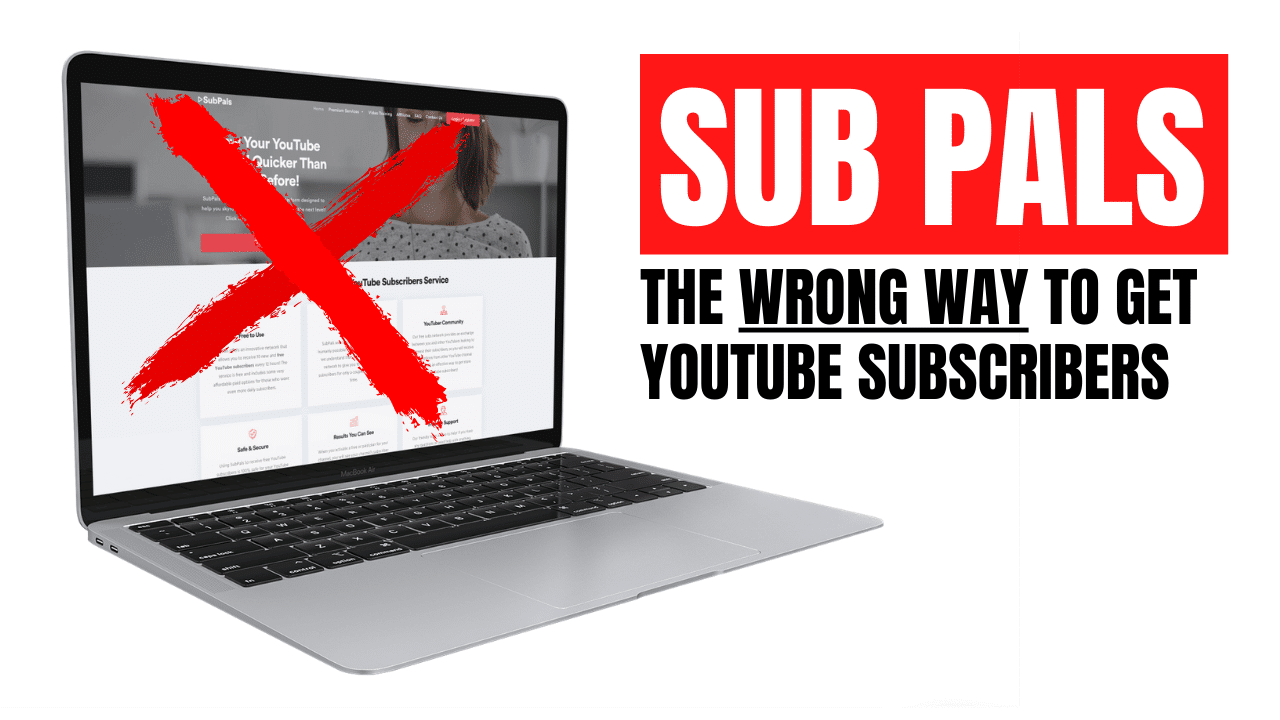 SubPals.com Review | Why SubPals Is So Subpar and Is It Even Legal

Although it's certainly not illegal, the concept behind SubPals is flawed and can do more harm than good. You will get the likes, comments and subs as they promise, but it is all meaningless and will not actually help you grow in any way that matters (clout, revenue, real engagement etc). If you only care about meaningless vanity metrics, by all means, check out SubPals.

Growing a large and engaged YouTube following is hard! For some niches, it might feel damn near impossible. So it's understandable to be tempted to use shortcuts.

I came across a service called SubPals that sells these shortcuts and I had to review it for you guys.

SubPals is a service that aims to help YouTubers get more likes, comments and subscribes. They also have programs for Twitch, Instagram, Twitter, Spotify, Soundcloud and Pinterest. I didn't test these other options but it seems that the overall concept is the same.

My Initial Impression of Subpals

The site was well done and it was clear this wasn't a fly by night business, but I was skeptical of the model. I was skeptical of even signing up to test it because I didn't want to accidentally get my own YouTube account shut down.

So I did some research and saw that it was pretty clear tons of people had done it and had "great," experiences.

Of course, you should always be skeptical of reviews from a company whose business is literally artificially liking stuff. But, TrustPilot isn't easy to game and I felt good enough to give it a whirl.

It's pretty clear that the business itself is legitimate, it's the general model I'm concerned with...

Well, good enough to give it a whirl with my burner YouTube account I accidentally created (don't ask how that happens). I never intend to use (it has 2 subscribers and 1 video I accidentally uploaded to the wrong channel) so if it got killed, it wouldn't matter to me.

The concept is this: Their large base of YouTubers (which claims to be over 1,000,000 active users) likes, comments and subscribes to each other's videos.

To join, you're required to provide a link to your YouTube channel. This will be the channel that you want to build up with SubPals.

You're then given the option of which plan you want. For the free plan, you have to like 20 videos and then subscribe to each of the video creators' channels.

You don't have to watch any longer of the video than it takes to hit like and subscribe. This is a problem because YouTube values time spent watching and uses it when choosing how pages rank.

You can't unsubscribe from the channels later or you'll get banned from the platform.

Although it will get you more raw likes, comments and subscribers, there are huge flaws in this model.

For example, this was the first video I was shown. Yes, I liked and subscribed but I will NEVER engage with this channel or any of the 20 others.

I'm a city boy. I pay for my car repairs.

Clearly, this is getting vanity results for the creator. 533 likes and 1 dislike (probably accidental) on 3,258 views is beyond good.

So good, that YouTube could easily see it's not genuine traffic.

But is this making the creator money? Is it growing their channel with actual fans? No way.

That is the essence of SubPals. Yes, you get the vanity metrics but it comes from people like me who have no interest in your stuff. There is no vetting of where the likes and subscribers come from.  It's a mess.

The ONLY Silver Lining of SubPals

There's a saying in real estate that is both idiotic and profound.

"Sometimes the only reason a house hasn't sold is because it hasn't sold."

This refers to the concept that if people see that no one else is interested in something, they assume theres something wrong with it.

So, your fake engagement COULD sway real viewers to assume there is something worth while in your channel and you might see some real engagement eventually as a result.

Like I said, I hate this but it's the case.

Are you willing to stoop to that level?

Your call, no judgement from me.

No, it's not a scam and the business delivers on what they say they will, but the underlying method is garbage. What they deliver isn't worth it.

Yes, you can get tons of likes and subscribers for free and even more if you pay, but they aren't going to do anything for your channel except make you feel more popular than you are.

Sure. There is nothing illegal about the activity. The real worry should be will YouTube eventually become annoyed by channels faking popularity and using their own in house punishments to deter people from buying engagement.

The only thing close to legitimate alternatives is creating good content and running good YouTube ads or doing collaborations with other channels.

I do NOT recommend using SubPals because I believe the model has the potential to do more harm than good. In the best case scenario, you'll get get a lot of subscribers, likes or comments with minimal harm to your future organic reach and engagement and you will get real followers due to a false validation that your channel must be worth following just because so many people already subscribe. In the worst case scenario, your new subscribers will completely ignore your future content and YouTube will see this as an indicator that you are producing bad videos that no one likes. Then, they will blacklist you from the search since they think you suck.

I don't believe SubPals is an unethical or illegal business though. It's just kind of lame. They're based on a model that is weak. Much like solo ads, they sound great on paper but don't live up to the hype in practice.

I don't recommend buying subscribers from SubPals or any 3rd party service. It is unlikely to do anything more than make you feel popular. Buy hey, knock yourself out if that's what you want!

The Only White Hat Way to “Buy” Real YouTube Subscribers for Under $1 [Google Adwords Tutorial]
6 Clever Marketing Tactics YouTubers Need to Know in 2022
Why Mr. Ballen Is the World’s Smartest YouTuber and What We Can Learn from Him – 10 Lessons
Do You Hate How Your YouTube Videos Look? Do This to Learn How to Make Them Look Amazing (for Free)
TubeBuddy Tactics | Get the Most out of the FREE Version of the Popular Software for YouTubers
Here’s How To Share Private YouTube Video in 5 Easy Steps
Load More Popular Posts