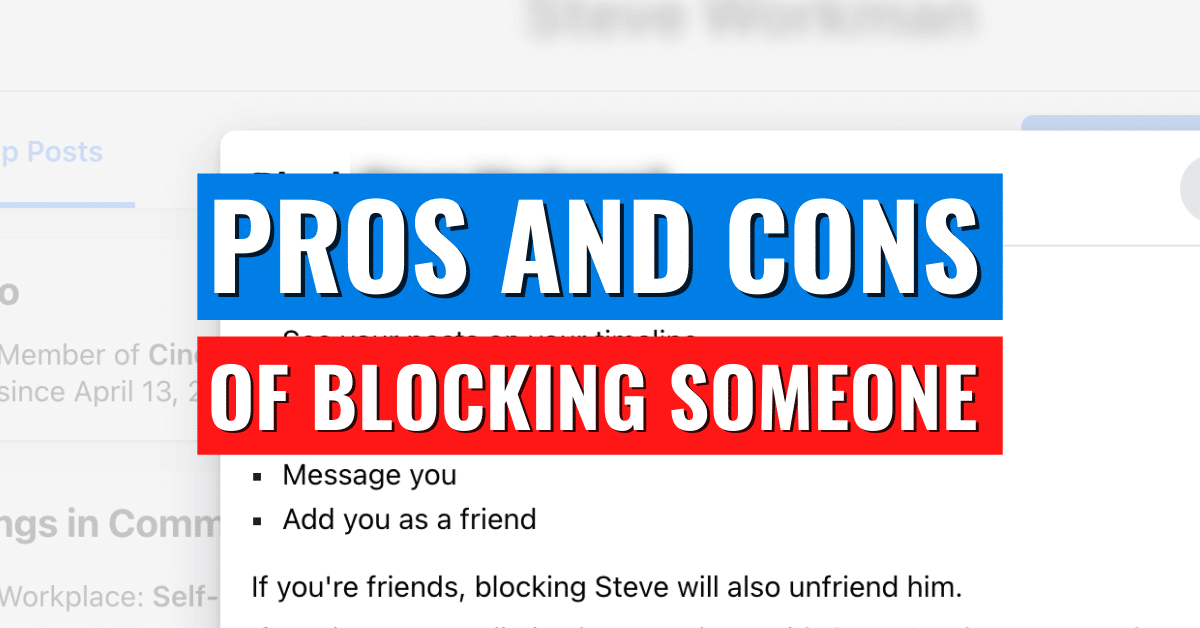 My wife tells me this all the time. If she sees I'm clearly in a bad mood because I've gotten myself into a dumb argument online, she wants me to cut it out.

In many cases, this is surely the right decision. Also, what an absolutely terrible habit on my part to be not only being distracted by my phone but also dampening the room with a bad mood!

Unfortunately, I'm a chromic over thinker and I cant accept that it's always that simple. I'm not able to always "block and move on," for a number of reasons.

If you want to truly have meaningful relationships and discussions online, we can't be too trigger happy on the block button.

If you don't want that and you don't mind taking the risks of a few awkward real life meetings, by all means, block away.

Also, if you're an influencer or business, your approach to blocking people deserves a deeper strategy.

However, I don't think there's a black and white answer to this. Instead, I've decided to compare and contrast the pros and cons of blocking someone vs keeping them around.

The Pros of Blocking Someone Online

Cons of Blocking Someone

So, what's the right answer? That's your call, but here are my suggestions.

#1 Work to be less combative yourself - If you think everyone around you is an asshole, you're probably the asshole. Seriously, if you are regularly getting into serious altercations with people, maybe you're the problem.

Think of the nicest person you know. They could do the jerkiest thing and it wouldn't hit you like it would if the rudest person you knew did it. Being a rude person makes you a magnet for conflict. Being nice is like negativity repellent. You'll get the benefit of the doubt more often.

#2 Pick your battles (if you can't avoid them entirely)  -Do I really care enough about the tipping practices of the United States to waste an hour fighting over it? No. No I definitely do not. I can't tell you how many arguments I've found myself in that I wish I could have just avoided entirely. Once you start, it's very difficult to stop, so think before you start.

#3 Draw a line in the sand - Some things are just not to be tolerated, regardless of the potential ramifications. If someone forces your hand to block them by saying anything hateful to you or others, remove them from your life. They have lost the privilege of your attention.

#4 Unfollow if you're just bothered by someone's content - Unfollowing is the chillest approach to cleaning your feed without being overly aggressive. Also, if you're stuck in a thread that keeps drawing you in, click "turn off notifications on post." Your silence will usually be more effective than any continued argument.

#5 Never feel guilty for a justified blocking - You don't owe anyone your attention. You blocking them in no way hinders their free speech or ability to use the platform.

#6 Don't sacrifice your mental health for business reasons - Yes, there are times when blocking someone won't be good for business, but never be afraid to block someone simply because it might cost you a few dollars in the short run.

#7 Take some time to consider the ramifications - Don't block someone in the heat of the moment. Especially people who you will have to interact with in the future. Put some space between the discussion and your decision.

I know many people who rare self proclaimed trigger happy blockers and they love it but there are also people like me who see blocking as a serious decision that has real world ramifications for you and the person on the other keyboard.