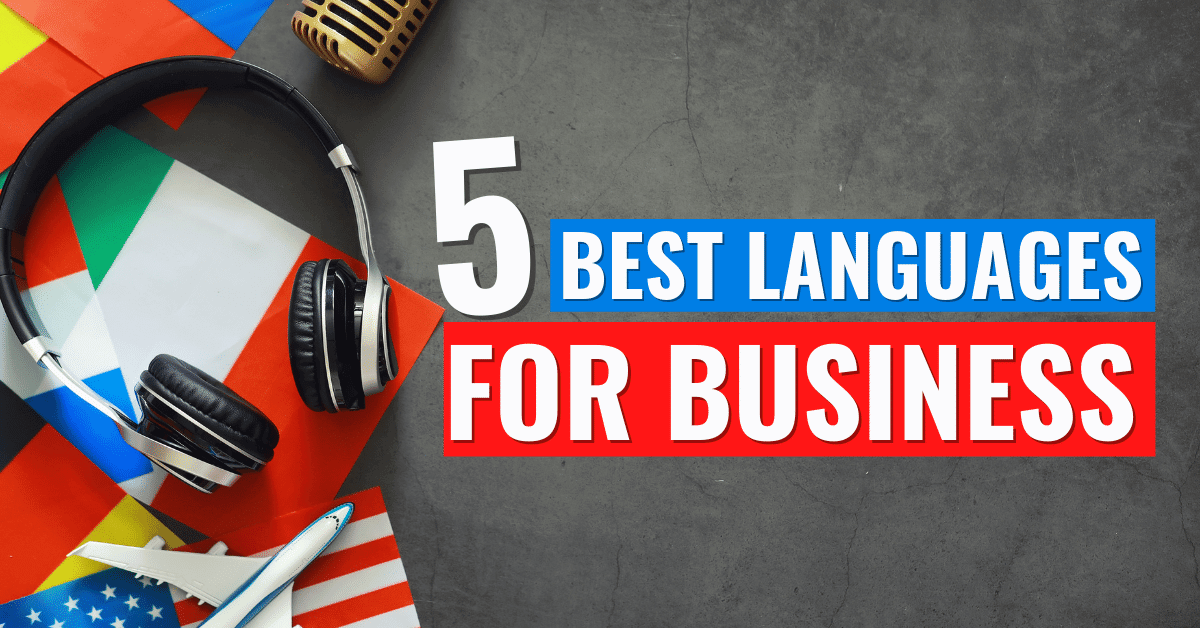 What Are the Best Languages to Learn for Business Success in 2021? The 5 Languages with the Highest Earning Potential Ranked

We live and work in a world of global markets, global trades, and global networks. The world of business is no longer confined to physical and linguistic borders, so why should you be? Learning THE best languages for business will take time and effort, but the personal and financial growth you will experience as a result are invaluable. But what languages should you learn and how long should you expect it to take?

First you should know what the ILR Scale is! It is a simple scale of 0-5 that covers language proficiency. If you know absolutely nothing about a language you are at a level 0. If you can converse well enough to survive a business call you are around a level 3. And if you have mastered the language like a native you are a level 5. Remember, everyone learns at different rates, and if you are already bilingual you will have a much easier time picking up new languages.

If you’re reading this you probably speak English, which gives you a huge leg-up in the business world. Over 50% of the internet is written in English! However, even if you are a native speaker, it is still a good idea to brush up on your grammar, spelling, verbal communication and business oriented English skills!

There are many ways to do this, and it is best to find what works for you. If you’re feeling a bit lost, we recommend checking out some online courses! Websites like Coursera, edX, and even YouTube, offer many courses and educational videos free of charge. Remember, there is always more to learn and ways to improve.

The fact that China is booming in the business world is not news to anyone. China has one of the fastest growing economies and account for roughly 13% of worldwide exports. China is also one of the biggest net exporters with a current account balance (that is import vs export trade value) of +$183 Billion!

If there is a language you should absolutely learn to better your business résumé it is Mandarin.

However, Mandarin is one of the hardest languages for a native English speaker to learn. There is no alphabet, many dialects, and something called tones which basically means that the tone a word is said in can completely change its meaning.

But don’t be discouraged! Remember there are 200 Million non-native speakers of Mandarin and 920 Million children have learned to read, write and speak it. You’ve got this and your business endeavors will thank you for the effort.

If you’re looking for a place to start check out Rocketlanguages, edX, and ChinaEducenter!

If you live in America you probably already know the value of learning Spanish, though you may not have realized just how many people speak it! Two members of the G20 countries (the 20 biggest economies in the world) are Spanish speaking: Mexico at a current account balance of -$14 Billion (the negative just means they import more than they export, which is good news if you’re looking for somewhere to sell a product!) and Argentina at -$2 billion.

Over 20 countries speak Spanish as their official language and over 30% of the US population is Hispanic. That is a lot of business! Better still is the fact that if you are a native English speaker, Spanish is relatively easy to learn! Both languages are Latin based and even share cognates or words that look and sound similar because they come form the same root (think celebration and celebración).

You might struggle with the rolling R’s and remembering your genders (a book uses the male “el libro” while a library uses the female “la biblioteca”..see you’re learning already!) Overall you shouldn’t have too much trouble picking up this language and we highly recommend it as a good place to start your multilingual endeavors.

Check out Duolingo, Babbel, and the well known Rosetta Stone to get started on your business future today!

India is the sixth largest market in the world and boasts one of the fastest growing economies. With a current account balance of -$75 Billion, overlooking India and their official language will leave you missing out on a literal wealth of opportunity.

While it is true that many people native to India speak English, being able to communicate with both business partners and the rapidly growing consumer population will be invaluable to you and your business.

Hindi is not the easiest language for a native English speaker to learn. More rolling R’s and a non-Latin based alphabet. However, keep in mind that because Hindi is a less commonly learned language (at least by native English speakers) it is also more valuable, so your hard work will be well worth it when you reap the rewards.

Japanese is another language that will be difficult to learn, but well worth the effort. While fewer people may speak the language than some of the others on our list, Japan is one of the largest economies in the world with endless value to your business. Their current account balance is +$56 Billion and 37% of their economy is trade. Japan is also one of the most technologically advanced nations in the world. Learning Japanese will open some of the most innovative doors for you and your business. While Japanese is an intimidating language with yet another non-Latin based alphabet, it can be easier than you might think. Japanese only has five basic vowel sounds, which are fairly common and not difficult to pronounce. There are also a surprising number of “foreign loanwords” in Japanese; that is words that are taken from English and slightly adjusted to become Japanese. For instance: “internet” becomes “intaanetto” (インターネット).

If you’re looking for the best online courses for Japanese, check out Japanese 101, FluentU and Loecsen's Learn-Japenese.

So, you’ve some idea of which languages you should learn and why. Let’s focus on the learning aspect. Picking up a new language can be daunting for anyone. But learning can always be made fun.

When picking up a new language don’t forget all the media and entertainment that comes with it! If you’re learning Hindi you’ll get to watch a ton of Bollywood movies (start with subtitled!) and with Japanese you get an endless world of anime and video games!

Reading books and comics, listening to music, and finding new friends to chat with will add spice and variety to the learning process. And did we mention the food? Each language comes with its own beautiful and unique culture and tasty cuisine! Go to a restaurant and try ordering without using any English, or search YouTube for cooking lessons in your chosen language. Keep it fresh and fun to boost not just your résumé, but your whole life!