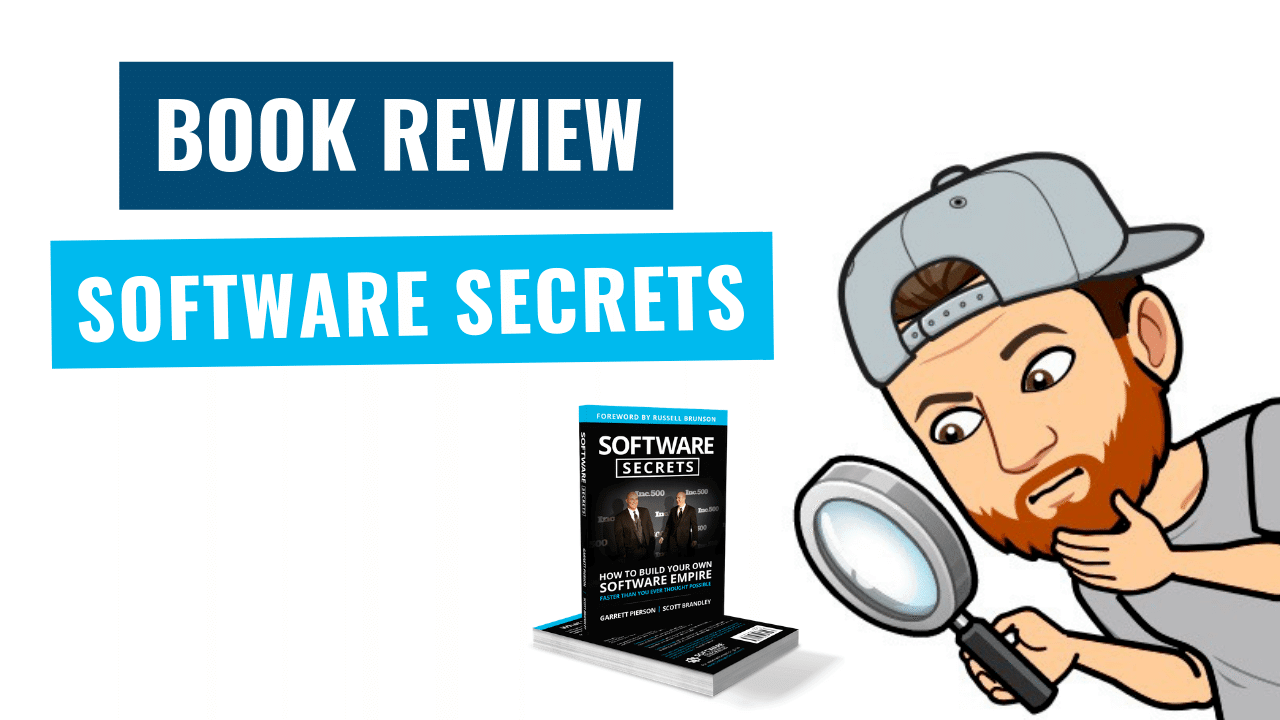 Software Secrets Book, Course and Software Funnels Review (from Someone Who Bought the Whole Funnel)

UPDATE JUNE 1 2019: The program pricing is much different now than when I originally bought nearly 2 years ago. It is actually a lot cheaper now. I've updated accordingly.

Creating and marketing software has been my #2 source of income the past 3 years (only behind affiliate income from promoting products, services and other softwares that aren't mine).

Software has changed my life and the beautiful thing of it all is that I have NO IDEA how to code.

I know some super basic HTML stuff to run this blog, but I have had absolute ZERO involvement in the development side of my software projects. That is exactly how I like it.

These software projects have helped me (and partners I work with) earn hundreds of thousands of dollars very quickly.

My goal is to always share what I know with you here and you may remember a blog series I wrote a couple of years ago about creating "simple" software products.

Note: It's gone now as I was planning on repurposing the whole thing into an Amazon book and you aren't supposed to have content in your books verbatim elsewhere on the internet. As I was wrapping up the book, something unexpected happened. Anything Clickfunnels makes, I buy immediately. You might know this about me by now if you frequent the blog (thanks for that by the way!).

I am a Clickfunnels fan boy through and through.

I bought the book during the first launch and then grabbed all of the up sells (including the then priced $1997 web course).

After I purchased, it closed to the public.

Since I was one of the few people who had early access to the first launch, I felt writing a review of what I got out of the course (which wasn't cheap) would be worthwhile.

So, let me break down the whole funnel for you and explain each product and what I thought of each. 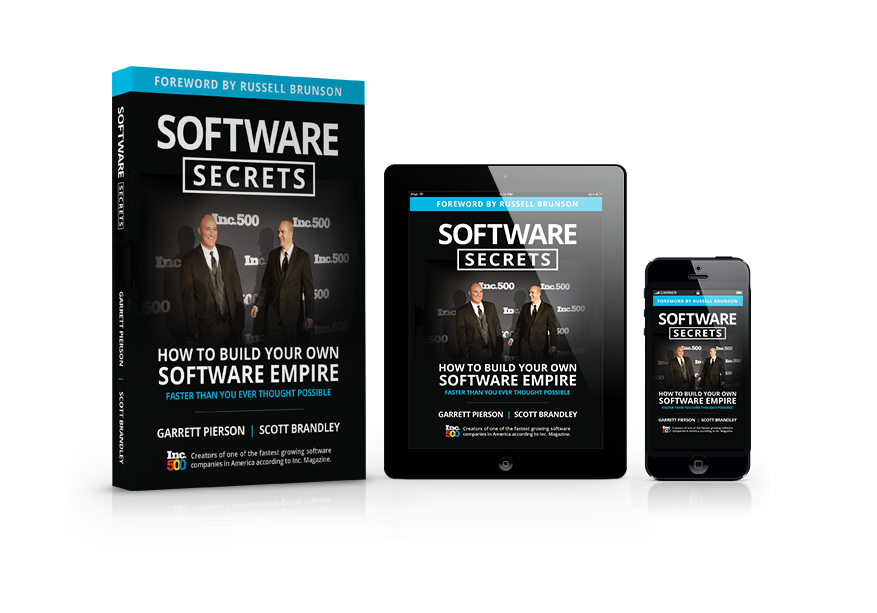 Every bit of the content was valuable and actionable but I felt there was some more that the authors may have held back.

"...the average reader would likely need to read this book slowly and more than once to really get 100% of the value from it."

That being said, there is value in a "quick read" and not overwhelming readers.

Since I've been doing this for a few years, I knew a lot of the concepts already (from doing things the hard way and wasting a lot of money in the process) and I'm sure someone new to creating software wouldn't think there was a shortage of information.

In fact, the average reader would likely need to read this book slowly and more than once to really get 100% of the value from it.

If you want to start making profitable software, this book will catapult you in the right direction.

Here is a look at the table of contents. The book is definitely comprehensive.

The authors, Garret Pierson and Scott Brandley, start by getting you fired up (or more fired up in my case) about the potential of creating and marketing your own software.

They then break down everything that goes into the process (EVERYTHING) from validating your idea to finding developers to launching your product to the masses.

If you're a software developer and actually doing the coding for the software yourself, you'll find this book to be insightful because it gives perspective from the marketing side of things.

If you're an idea generator/marketer/coordinator, this book is going to be your holy grail for getting software launched even though you lack coding skills.

In typical Clickfunnels fashion, they give a tremendously valuable higher end offer once you buy the book.

This offer isn't cheap, but it isn't short on value.

Here is what you get if you bite on the upsell like I did. OLD PRICING (What I Paid) Inside the Software Secrets Master Class

The Software Secrets master class is going to be a much more detailed version of what is taught in the book.

The videos are well done and the creators are likable and easy to understand. Making large concepts understandable to new software entrepreneurs isn't easy, but Garret and Scott do it tremendously well. It reminded me of one of my all time favorite quotes by Woody Guthrie (some credit it to Albert Einstein).

"Any fool can make something complicated. It takes a genius to make it simple.”

That is what I loved about the masterclass. They made the complex seem simple.

The part that really sold me on the program was the bonus Software Funnels software that was added.

There are other softwares that do what Software Funnels does BUT I don't know of any that bring all of them together under one roof.

The web based Software Funnels program does several things that make launching your first software easier to manage.

I have never used this. It's cool, but I had already brainstormed my software ideas by the time I purchased.

This is a neat feature, but I prefer using a real physical whiteboard and taking pictures of it for sharing. It's a preference thing. You may prefer to use the built in whiteboard so it's a nice add on.

I love mind maps. I've tried many mindmapping softwares and the one inside Software Funnels holds its own comparatively.

Here is a mind map that I created for possible billing options for a software I am working on.

Simple, but powerful. You're free to use this any way you please. I liked using it to plan pricing structures.

This is where I REALLY found value in the Software Funnels program.

The wireframe software allows you to create drafts of what your software should look like.

These are non-functional "shells" for your developers to understand what you want various pages of your site to look like.

Here is an example of a page I created a wire frame for. It shows the "edit profile" page for one of my projects. Once you read the book, you'll realize why creating wireframes is so critical when you aren't the one doing the coding.

Don't worry, wire-framing isn't difficult. With a little bit of time and focus, you can craft wire-frames that will make your software project exponentially easier and more likely to succeed.

Good wireframes will save you time and money. When you aren't clear with your developers, you're taking a chance that they might do work that isn't acceptable. That means wasted money and worse, wasted time!

This feature will allow you to manage your softwares and give substance to your projects.

You can share this (and all of the software funnels work you've made) with your team of developers and they can see and check off tasks as they come up.

I have always used other channels for project management so I didn't utilize this feature, but if you're new and don't have a pre-existing "home base" for your team, this should be your first choice.

​I communicate with my developers and partners on Facebook messenger, Slack and directly on Upwork so I didn't take advantage of this option.

Again, if you're new and haven't established a reliable communication medium, you would want to use this for continuity.

​Another great feature that I didn't use because I had existing systems in place. The help desk allows you to manage the backend of your software once it's created. Many creators forget this critical step and have to handle customer support on the fly and it leads to a lot of headaches. ​​

How About the Other Bonuses?

The other bonuses are enticing...

Access to developers was a very cool add on, but again, I already had developers and didn't try out theres.

Finding good developers is very, very difficult so having this short cut would be awesome. But, I can't say I have experience with the exact developers that the folks connect you with but I'm assuming they are going to be top notch since they reflect directly back to the creators who referred them.

Accessing the 3 free SAAS funnels is also great, but I use my own funnels already.

So Is Software Funnels Worth It?

The book bundle at $27 + shipping and handling is a NO BRAINER if you're interested in creating software products that make real money.

The course and added bonuses are worth it but I don't recommend going into debt to purchase it. Read the book first and then, once you're all in, consider the full $1997 program.

Even though I've only taken advantage of a few of the features and bonuses, my investment has had a tremendous ROI and I would have paid much, much more for it if I had to.

Disclaimer: I am an independent ClickFunnels Affiliate, not an employee. I receive referral payments from ClickFunnels. The opinions expressed here are my own and are not official statements of ClickFunnels or its parent company, Etison LLC.”*