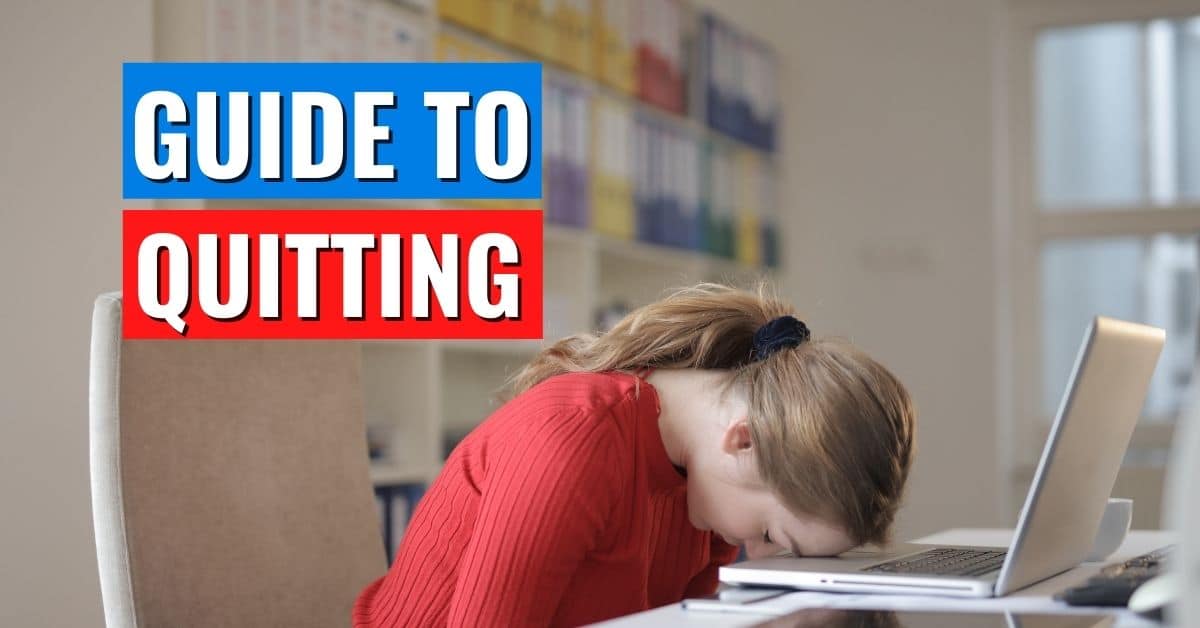 Everything You’ve Been Told about Quitting Is a Lie

Negative connotations have surrounded the word "quitting" ever since it was first adopted into the english language in the early 13th century (yes, of course I had to google that fun factoid).

The word evokes the same negative feelings as words like failure, defeat or lost.

Sayings like, "Never quit" or "quitters never win" hang across locker rooms and guidance counselor's offices across the country.

It's easy to get onboard with this idea and no one can argue that tenacity is a characteristic of almost every high achiever.

There's no shortage of quotes that make quitting seem like it's totally destructive.

But, treating quitting like it's always a negative thing is counter productive.

Ironically, never quitting can be just as destructive as quitting too soon or too often.

"Ironically, never quitting can be just as destructive as quitting too soon or too often."

This article examines our relationship with quitting and will help you learn how to utilize it for a better life.

Note: Please read this entire article before taking any action. Leaving with incomplete insights into the concepts in this article can be harmful. This is not an attempt to validate a losing attitude or glorify shiny object syndrome. It is a less common view on a misunderstood concept. You'll be better for reading it in its entirety. And, come, on, it's like a 6 minute read..

I spent 7 years and over $40,000 to get a degree in economics. I was pumped full of ideas, terms, and formulas. I'd regurgitate all of this onto tests and into assignments and then repeat the process week after week.

Most of what was going through my large head (which held my average sized brain) did little more than help me pass from one semester to the next without needing to repeat courses.

I did this with the same aspiration as 99% of my peers, to get a good job and earn more money.

Ironically, I quit the job that my degree helped me get almost immediately and haven't used the resume it brightened a single time in 7 years.

The time and money was far from wasted though. Three of the 1,000s of concepts I learned changed my life and were worth the $40,000 many times over.

The good news is these are incredibly basic concepts that you've surely heard before but likely didn't give much thought to.

Understanding sunk costs and opportunity costs can change your life for the better. The concepts are simple but it's developing the awareness to spot them that makes all the difference.

That is sunk costs in a nutshell.

Yes, seriously...One of the three biggest takeaways from my 7 years in college was something you'd say half jokingly to someone after they lost at a Vegas blackjack table.

"Sunk costs are those which have already been incurred and which are unrecoverable. In business, sunk costs are typically not included in consideration when making future decisions, as they are seen as irrelevant to current and future budgetary concerns."

Sunk costs are the enemy of letting go of things that no longer serve us. They tie us to projects that have less potential than others because we have a fear of losing time, energy or money we've already spent.

For example, I bought a relatively expensive bottle of protein powder last month and quickly realized that I hated it. Plant based protein is very hit or miss....

Instead of doing the logical thing, I kept the jug around and slowly whittled away at it. After a week of drinking it, it started to become almost unbearable to stomach. I was literally holding my nose as I downed it after workouts.

The protein was $50 but if you told me, "I'll pay you $50 to wake up everyday for a month and drink something disgusting," I'd have laughed at you.

So why was I doing this to myself? I had fallen victim to the sunk cost fallacy. My logic was "I already paid for it, I need to drink it."

Fortunately, I spotted it and threw the jug in the trash and it's back to hell now where it belongs.

For instance, a couple who can't stand the sight of one another might stay in a relationship merely because they've already been together for 4 years and spent $1,000s on therapy.

Or an accountant may stay in the field he loathes because he went to college and paid $60k+ for his accounting degree.

Both decisions are far heavier than my repugnant protein but they both might benefit from "cutting the losses."

The 4 years spent and $1,000s on therapy can't be returned and they have no bearing on the future. Likewise with the accountant. He can't reverse his course work or ask for a refund on his loans (student loans are the herpes of the loaning world).

The best bet for both would be to move on. Should the accountant do work he hates for 40+ more years just because he spent 4 upfront? Should the couple live a loveless relationship full of resent for the rest of their lives?

Now I'm not suggesting everyone should quit their job or leave their partner, but no decision should be immune to introspection. Nothing we do should be decided solely on costs that we can't recoup regardless of our actions going forward.

Quitting is hard. It's in our nature to fear loss. Research suggests that we will work harder to avoid loss than to chase achievement.

A benefit, profit, or value of something that must be given up to acquire or achieve something else. Since every resource (land, money, time, etc.) can be put to alternative uses, every action, choice, or decision has an associated opportunity cost.

There is no pride in being a "yes man." In fact, it's not even possible to be one when you really think about it. Sure you can say yes to everything out loud but there are silent "no"s that follow.

No matter how hard you try, saying yes will always mean saying "no," to something else.

"Yes, I'll be on your podcast tomorrow at noon Tina," means "No I can't go to lunch with you at noon Gina," or any other task you might do during that now booked up noon hour.

Choosing to stay the course means choosing to NOT pursue a better one.

The Quit or Continue Thought Process

Quitting something is serious and deserves deep contemplation. Every decision you make will have many different variables and ramifications to your life and the lives of others. I can't tell you how to feel about any of them BUT I can give you a quick list of things I consider when deciding whether to quit or continue something serious.

Step #1 Weigh the pros and cons

Straight forward. Get a pen and paper if you want and make two columns. Write as many as you can think of take a break and try to write some more.

Pro Tip: If you're considering leaving your job, I don't recommend doing this part at work . Your boss might end up making the decision for you if they find it.

Step #2 Review who the decision impacts

Our decisions can impact others in ways we might not have realized. Forgetting to consider this can lead to serious damage and regret in your decision if it inadvertently hurts people you care about.

Step #3 Ask what is being given up (opportunity costs)

It's much easier to give up something when you're opening the door to something better. Of course, just because there is a better opportunity out there doesn't mean you should immediately throw in the towel.

It's scary how many of the decisions we make are based in flawed logic. The best way to avoid it is with critical, open minded and objective analysis. Questions to ask here should be, "does that matter?" and "does that have any bearing on the future?"

The urge to quit follows us to some degree even on the things that we want to do and know are best. Don't let your decisions be made based on fleeting emotions of boredom, anger, frustration or tiredness. Those same emotions will be a part of anything you do to some degree.

Step #6 Get advice from someone you trust

This can be dangerous if you're taking advice from just anyone. Serious decisions don't deserve the opinions of the masses. They deserve opinions from people who you know have your best interest at heart and who you respect to give you insightful advice.

Try to find people who are free from bias. Asking your mom if you and her grandkids should move to San Diego is going to involve a pretty biased answer.

If the decision involves specialization like financial investments or business decisions, seek people you know are competent in the space. Your mom is probably great at giving advice but it's unlikely she's the best person to tell you whether you should drop $50k into Bitcoin or change from an LLC to an S-Corp.

This is all heavy stuff and the wrong takeaway from this is that you should go quit whatever you don't like.

What I want you to take from this is a new perspective on decision making and how quitting, when done after deep consideration, can be harnessed for good.

I don't know, but you need to have an open mind to everything. Don't blindly accept that "quitting is for losers," because it simply is not true.

Deeply consider the ramifications of staying the course (the opportunity costs) and whether your decisions are being clouded by bad logic such as weighing sunk costs that don't impact the future.

Making the decision to pursue entrepreneurship in spite of the sunk cost of 7 years of schooling and $40,000 in loans was the best decision I ever made. I hope that you find ways to quit that provide the same sort of return for you.

How to Read and Actually Learn (No Speed Reading!)

How to Read and Actually Learn (No Speed Reading!)

Entrepreneur’s Guide to Pricing Anything with Laser Like Accuracy