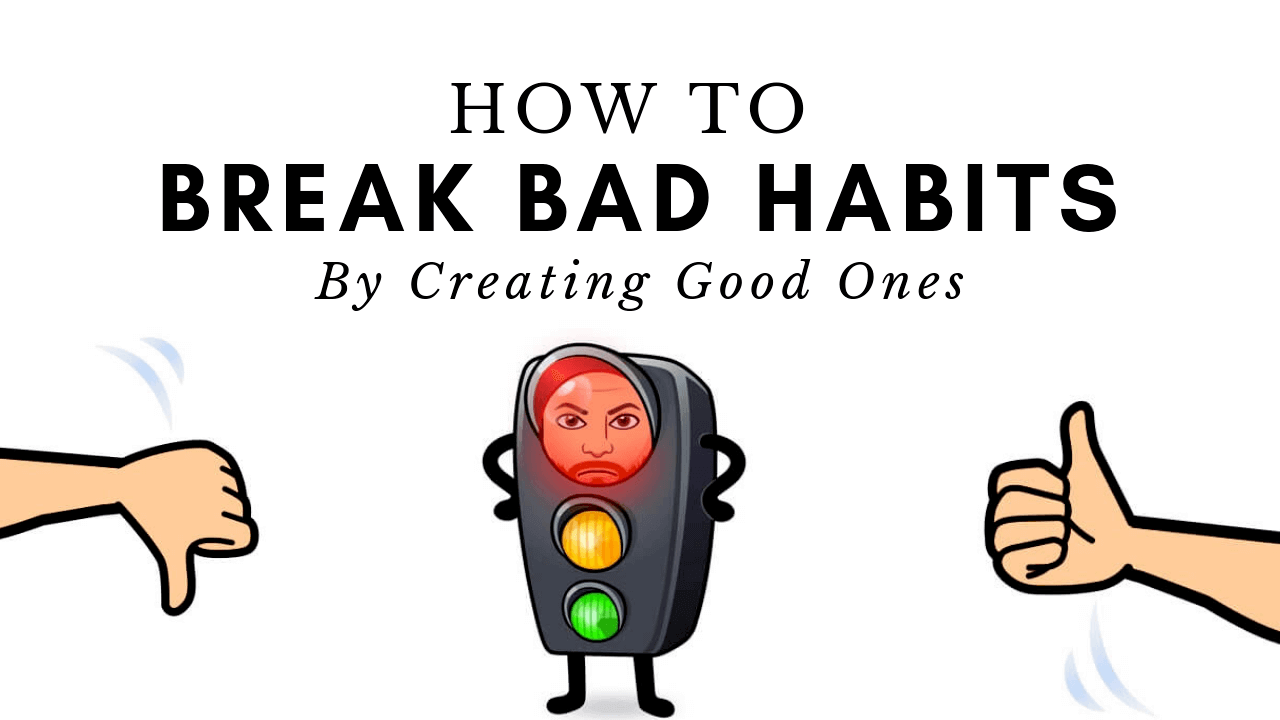 How to Break Bad Habits by Creating Good Habits | Lifehack

"Winning is habit. Unfortunately, so is losing."

Habits, good and bad, dictate how much success we will have in life and business .

I won't insult your intelligence by explaining why good habits are good and bad habits are bad (DUH!) It's painfully simple.

If it's so simple, why is it then that we know what to do yet still, most of us aren't world class in our field or living lives that fulfill us?

Why is it that we STILL have so many bad habits and so few good ones?

Why do so many people (who understand that good habits are good and bad habits are bad) find themselves regularly bingeing on Taco Bell at 2 AM, smoking cigarettes right after watching commercials explaining how they are going to make them lose limbs, watching entire seasons of Fuller House on Netflix in one sitting (shame!), and just generally doing things they know aren't helping them reach their goals?

Well, there are a lot of factors at play when it comes to willpower and habit formation.

In this article I will be talking about just one aspect of habit formation and willpower: creating good habits instead of breaking bad habits.

I want to explain...

Let's talk about "white bears" for a minute and I'll explain what the hell they have to do with breaking bad habits.

"Don't think about a white bear"

In one experiment, Wegner asked participants to NOT do one, simple thing. Something that none of them were likely to do had he not mentioned it.

"For the next five minutes, please try not to think about white bears.”

Participants were instructed to press a button every time they lapsed and fell into their new found craving to think about white bears. None of the participants were able to keep the thought of white bears out of their minds. Trying to suppress this thought made it nearly impossible to control.

Wegner coined what participants were experiencing as the "ironic rebound effect."

The ironic rebound effect states simply that when we try to repress thoughts or emotions, it has an ironic, opposite effect and we think about these things more than if we didn't try to ignore them actively...

While this seemingly self-destructive tendency of our brains is a little upsetting, understanding how the ironic rebound effect works can help us find new, better ways to make and break habits.

John wants to lose weight. He knows he could easily accomplish this by cutting sugar from his diet (he has done it many times) BUT he always finds himself succumbing to the cravings eventually (sometimes after just a day, sometimes after a month or two) and he ends up gaining all the weight he lost back plus interest.

John's goal is to lose weight and his attempts to do it by removing things (killing a bad sugar habit) lead him to crave sugar more eventually.

He could accomplish his weight loss goals by creating more positive habits that could in turn ALSO help him reduce his cravings for sugar without actively trying to do so.

Here are three positive habits that John could implement that would help him in a number of ways AND curb his sugar cravings indirectly. He wouldn't have to actively push the thoughts of sugar from his mind and would therefore be able to avoid the indirect rebound effect...

John decides to make a habit of meditating for 10 minutes each morning. Meditation is proven to increase willpower throughout the day in other areas of life.

​John decides to create the habit of eating at least one serving of vegetables BEFORE he eats any other part of his meals. Studies suggest that consuming more vegetables can reduce sugar cravings. This will also leave John more full after each meal and his natural cravings for sugar should decrease.

Now, we can't always beat bad habits by adopting good ones. Sometimes we do need to call on deeper, inner strength to kick difficult habits like smoking, binge eating and other addictions.

I do believe strongly (and science agrees) that often times, the best way to kill a bad habit is to create a good one. I recommend you consider shifting your mindset a bit and start focusing on subtraction by addition instead of subtraction by forced distraction (which leads to the indirect rebound effect).

What is your white bear?

Life Changing 30 Minute Mobile App Habit Stack Anyone Can Do