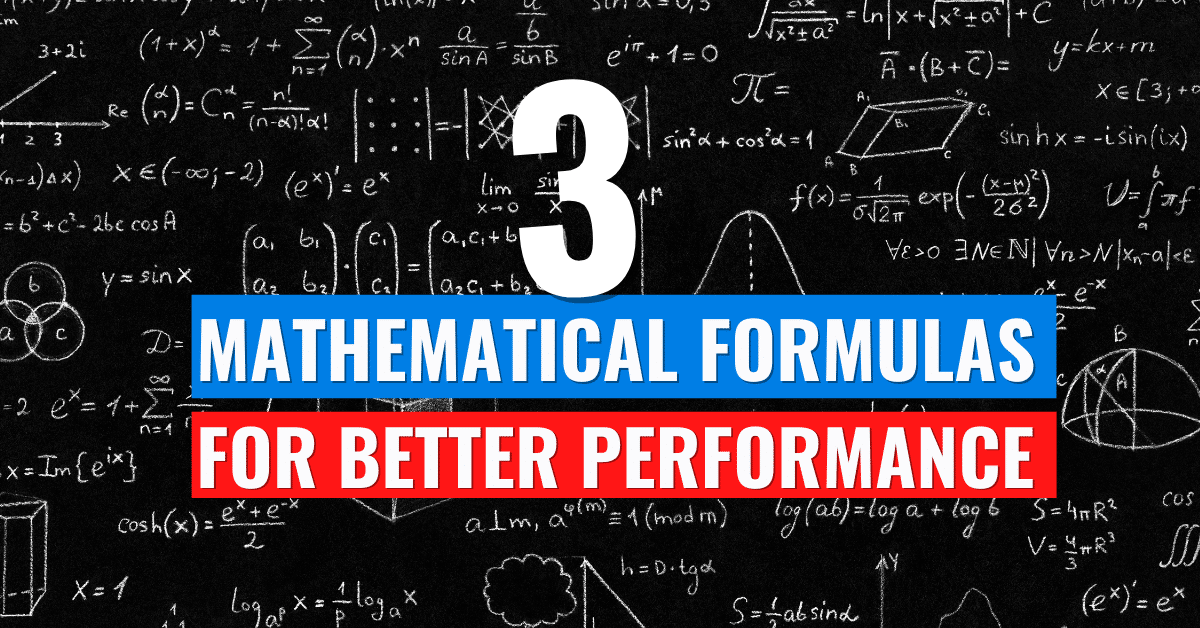 Formulas for Life – 3 Mathematical Equations for Better Performance in Anything

Some of the greatest pieces of advice actually come in the form of simple mathematical equations.

In this article, I'm going to show you how to...

**To all of you math scholars cringing at the fact that these formulas aren't simplified, I promise I am leaving them this way for a reason. Trust me.**

I'll explain each in detail. Pay close attention because each has the power to change your life. To make you more effective in every single aspect of your life.

Yes, unlike formulas like the Pythagorean theorem, they aren't absolute. There is room for debate in these.

However, they are all true enough to provide powerful insights.I choose to approach them as if they are absolutes. There is no harm in them being slightly overstated or understated. The principle is what matters.

If you google "The Rule of 40%" you'll see results about the growth of software companies. That isn't the rule in this example.

This Rule of 40% refers to mental toughness and the amount how much of our true potential we tap into. Less than half!

This concept was first introduced after a man named Jesse Itzler watched a 265 lb navy seal absolutely annihilate competitors in a 24 hour marathon (most who weighed over 100 lbs less than him).

By the end of the race, the seal had tremendous injuries. Kidney damage, dehydration and broken bones in his feet. The idea that he not only finished the marathon but won was dumbfounding.

Itzler had to learn how this man developed this Spartan-esque willpower so he moved in with him for 31 days. The long-short of what he learned is that human beings typically use only 40% of our physical and mental potential. When we think we are done, we can really go 1.5x farther, longer etc.!

Here on the EntreResource.com blog, about 80% of my traffic comes from 20% of my articles.

This principle also spills over into other areas that are less connected to effort. Here are some examples in my online businesses:

The takeaway is that most of what we do doesn't lead to results. The more time we can spend on the 20% of things that drive the most results, the better our results will be overall. Many business owners cut the other 80% of output that is leading to just 20% of the results in order to focus it all on the 20% that is driving 80%!

Focus = Where we spend our efforts

One day, legendary investor Warren Buffet approached one of his employees, Mike Flint. Flint had been his pilot for over 10 years and Buffet wanted to help him set his career goals. So, Buffet gave Flint a simple exercise.

This approach is not common. Many people who believe they are highly productive still have massive lists of goals and things they try to focus on each day. In Buffet's opinion (which is of course very highly regarded) we need to make the hard decision to say "no" to a lot of things that aren't absolutely top priorities for our lives.

Can you think of any other formulas for personal effectiveness? Leave them in the comments.

The 5 Languages with the Highest Earning Potential Ranked – Learn These First
The Self Development Reading Paradox – Why Reading So Many Books Might Be Slowing You Down
Skill Stacking for Entrepreneurs | Stand Out with Unremarkable Skills
My 10 Favorite Kindle Highlights for 2022
Life Changing 30 Minute Mobile App Habit Stack Anyone Can Do
How to Read and Actually Learn (No Speed Reading!)
Load More Popular Posts