Mental Laziness vs. Physical Laziness | You’ve Been Lied to and It’s Holding You Back

When I was 19, I started working as a package handler at a UPS hub in Hilliard, Ohio.

This was on the heels of being unceremoniously fired from my job as a bar-back at an Irish pub. While it was seemingly the perfect job for me on paper (red beard, Irish name, etc), it ended up being a lot like hiring a mouse to watch your cheese. I did my fair share of "researching," the tap offerings whenever I went to go and change the empty kegs.

On a brighter note, my months of keg sampling weren't mentioned in my termination meeting. So... slainte!

Until that day, I hadn't worried about identifying as a "hard worker" at any of my previous jobs.

Now, I didn't think I was a lazy person overall. I wasn't above working hard when it was something I cared about. I had always worked hard in sports in high school and improving my skills as a musician but that was pretty much where it stopped. For everything else in my life I adopted a "let the chips fall where they may" approach.

The firing was a crossroads for me. It was a chance for me to passively embrace a new identity as the lazy guy who was going nowhere OR pivot and start to do work I could be proud of for once.

Fortunately, a blessing in disguise was happening and I found out the woman who is now my wife was pregnant and I'd be a new dad soon. 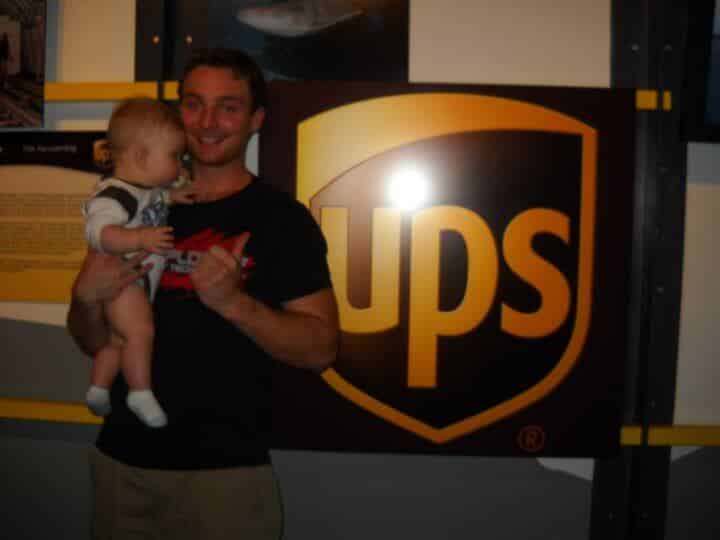 I became a dad while working at UPS and needed to tighten up in many regards.

So, I chose the latter. I'd be working for potentially another 45+ years of my life and I don't think my ego could handle being labeled as a lazy guy for the entire time. Also, what sort of impact would it have on my future son if his dad was a lazy bum?

At UPS, everything changed. It was a fresh start and I was a star (as much as you can be).

I broke the record for miss load ratio (number of incorrect packages compared to total correct packages) and had processed more packages than anyone else in the 200+ employee hub by over 10,000 packages my 2nd month there.

I was promoted to shift supervisor in just a few months.

Side Note: UPS is an outlier in that sense by the way. They promote from within and raw output can earn you a new job title and pay raise very quickly.

There were pros and cons to this approach that rewarded physical effort.

The pros were the employees felt extremely respected (at first) and motivation was high among the front line package handlers since they knew they'd be rewarded if they worked hard.

There was a major drawback though. Many of the superstar package handlers were terrible supervisors.

Grunt labor and raw output no longer mattered. Physical effort was no longer a factor in any regard. Success was now dictated by how much work we put in between the ears, so to speak. In order to succeed at the position you needed to become someone who put forth a tremendous amount of mental effort.

Many people just aren't wired for both. This led to a lot of this type of conversation...

"I work harder than anyone here and I haven't even been interviewed for a second promotion in years...They keep promoting everyone else."

You've worked with this person, we all have. Heck, maybe you ARE this person. It's ok if you are, you can adjust. Personality isn't permanent and mental effort can be learned by anyone willing to become aware of the need to do so.

Mental laziness is always the obstacle of continued growth. You won't find a CEO who sweated his or her way to the top. Sure, there are CEOs with that inspirational "I started from the ground up," story but all of the high level team members got where they are through tremendous amounts of strenuous mental effort.

Ok, nepotism throws a wrench in the "always" there but pretty much always.

Now, most truly successful people put forth a tremendous amount of both mental and physical effort (if needed). It's not uncommon to read about CEOs like Jack Dorsey who put their bodies through grueling daily exercise and nutritional rituals.

It's extremely impressive to most people who would gladly retire if they had billions and eat bonbons on a beach somewhere. But that's why people like Jack are successful and most aren't.

However, mental effort is by far the more valuable of the two. You can make a career and rewarding life with mental effort alone.

When I was a grunt level package handler, I was in total control. I could just work harder and get rewarded for it. All of my problems could be solved by putting my head down, turning up my music and just getting after it.

When I got promoted, I couldn't sweat my way out of things. There was no music to numb the uncomfortable thoughts of how things could go wrong.

Instead of doing the work myself, I had to get 10+ people (almost all of who were much older than me) to do the work. UPS was unionized and supervisors weren't allowed to touch packages without the risk of a grievance being filed against them.

As packages started to pile up around me that I couldn't touch, I started to become extremely uncomfortable. I was now facing a new type of work and until that time, it was completely foreign to me.

Hard physical labor was replaced by...

By the end of the day, I was always more exhausted than when I was throwing around thousands of packages. I'm not speaking figuratively either. I'd go home and pass out asleep when before I'd be game to go out for a beer or 8 with my co-workers.

"This is why mental effort is so much more valuable. It scales beyond limitations of our own time and physical capabilities.."

Fortunately, I was motivated enough from the shame of my recent firing that I did put in the effort and had a nice little run with UPS before I graduated from college and moved on.

Although deep down I knew I was an entrepreneur at heart, the skills I learned and what I discovered about myself at UPS changed my life.

My example is pretty typical but there are many other examples of areas that can be harmed by mental laziness.

Here are just some examples that could be ruining your life and negatively impacting the lives of the people you care most about.

Although our society praises the hard manual labor of the men and women that run our businesses, success at an extremely high level always takes more. It takes tremendous mental effort.

Identify the areas of your life that are requiring mental effort. Grade yourself on how much work you're putting into those areas. Isolate and destroy areas of mental laziness and you're going to see huge change in all aspects of your life.

You can't overstate the value of choosing to identify as a hard worker in all regards. Deciding to adopt this at 19 changed my life.

Uncovering Walmart Hidden Clearance Deals – Save (or Profit) Big in 2023

ChatGPT Prompts for Business Owners (That Are Actually Useful)

ChatGPT for YouTubers: 10 Exciting Ways to Enhance Your Content